You don’t see it much anymore, but there was a time when the advertising industry went beyond sponsorship, to full blown integration. Never was this as clear as it get with animated cartoon shows. The sponsors were so engrained in to the industry, that they even saw themselves in the show. The biggest of the sponsors was Kelloggs, the Michigan based cereal giant. Hanna Barbera productions, the creators of the Flintstones, not only used the cereal boxes, but often incorporated the mascots into the shows. Here are a few classic videos showing the way advertising used to handle their clients’ promos.

The first spot focuses on the end credits of the Huckleberry Hound Show from the late 1950s. Not only does the show give props to Kelloggs as the sponsor, it goes as far as to incorporating the mascots of every popular product in the clip! They are known as (in sequence) “Cornelius Rooster” for Corn Flakes, “Snap, Crackle and Pop” for Rice Crispies, “Tony the Tiger” & “Tony, Jr.” for Frosted Flakes, “Smaxey the Seal” for Sugar Smacks, and “Sugar Pops Pete” for Sugar Corn Pops. Yum!

This next series is a collage of spots using the whole cartoon calvade from Hanna Barbera. Each one goes to great lengths to sell the goods. Check ’em out! 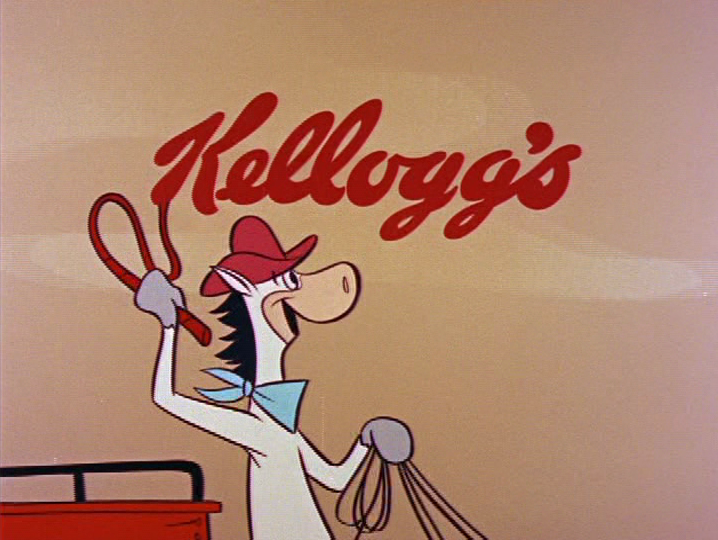 This risque little bit portrays the gang as thje “Kelloggs Original Minstrels, with the characters performing a song and dance rountine. It ventures into dangerous waters as Yogi breaks out in a modified rendition of Al Jolson’s “Mammy”. Still, it’s a nice spot. Well animated and very effective.

Pixie, Dixie, and Mr. Jinx use futuristic computer technology to discover the secret of great taste in Kellogg’s Raisin Bran.

Top Cat gets his hustle on as he and the gang cleverly talk Officer Dibble out of his precious Corn Flakes.

This final collage of spots not only showcase unique Hanna-Barbera Kelloggs spots, but also include the Warner Bros. characters boasting their various sales tactics and allegiance to Post Cereal products. 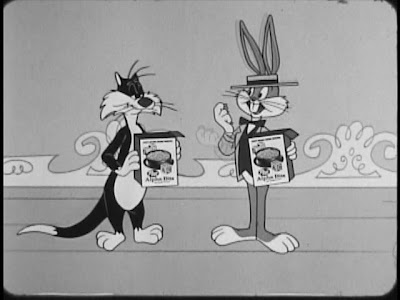