Enki Bilal in his Studio

posted on September 14th 2009 in Comics & Observations with 2 Comments 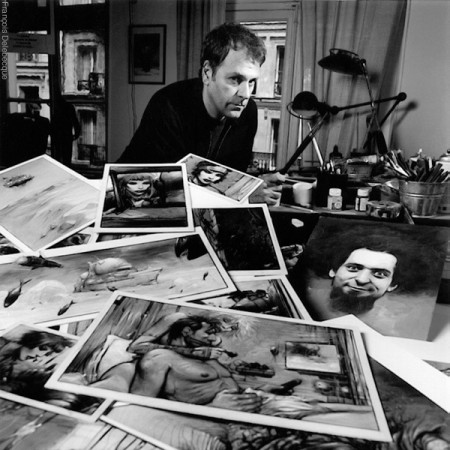 Many of you have probably never heard of Enki Bilal, but he is a major influence in my life as an illustrator. When I was in college, I came across a copy of Métal Hurlant, a French comics anthology of science fiction and horror comics. It was started by another artist who caught my eye a few years before named Jean Girard (more popularly known as Mœbius). It eventually was brought to the US by National Lampoon magazine and retitled “Heavy Metal”.

Métal Hurlant (translated literally as “screaming metal”) was the publication that introduced me to the power of comic illustration and storytelling beyond the superhero genre. In Europe, the “graphic novelists” were highly regarded as the masters of storytelling, much like our literary masters here in the US. The ability to not only tell a great story, but to drawn it out in comic form was true genius in my world. I eventually spent the 80s tracking all of them down, book by book, until I had samples of all their work. Milo Manara, Juan Gimenez, Daniel Torres and Enki Bilal. They became my teachers, mentors, critics, heroes.

Of the group, my favorite has always been Bilal. His mix of natural media, cartoon art and depth of expression have inspired me to no end. Two of my favorite stories were The Nikopol Trilogy, set in 2023 Paris. It follows Alcide Nikopol who returns from a 30 year sentence spent orbiting the earth under cryo-preservation to find France under fascist rule following two nuclear wars. The other was The Hunting Party,( Partie de chasse) is a political thriller graphic novel from 1983 written by Pierre Christin and illustrated by Enki Bilal. It is centered around a group of old, mostly retired or disgraced Communist bloc political leaders who meet in Poland for a bear-hunting party under the guide of Soviet Presidium leader “Vasili Aleksandrovič Čevčenko”, an aging revolutionary leader who, while retired from official duties, still retains much of his power and political influence. Both of these stories are fantastic in scope and expression, pushing the medium beyond anything I’d read up to that point. I soon went on a quest to track down all of Bilal’s work, including his gallery paintings. During this search, I discovered that he had directed Immortel, a film version of his novel The Carnival of Immortals. This added to my impression that Enki was truly the ultimate creative of his generation.

Inspired by his grasp of science fiction, I too decided to venture into this realm. Most of my work never got past the sketching stages, but I managed to develop a style based on Enki’s influence. Look to see some of these sketches posted on my site in the near future.

I did, however, manage to tackle a few sci-fi graphic novels in the 80s (if only I could FIND them!!), which I enjoyed to no end. I have a new sci-fi story whioch I’ll begin after I complete my current graphic novel project.

So that’s my mentor. Now here’s a treat I want to share. It’s a video of Enki Bilal working in his personal studio in France. Enjoy. 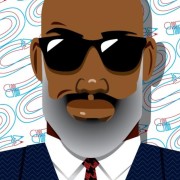